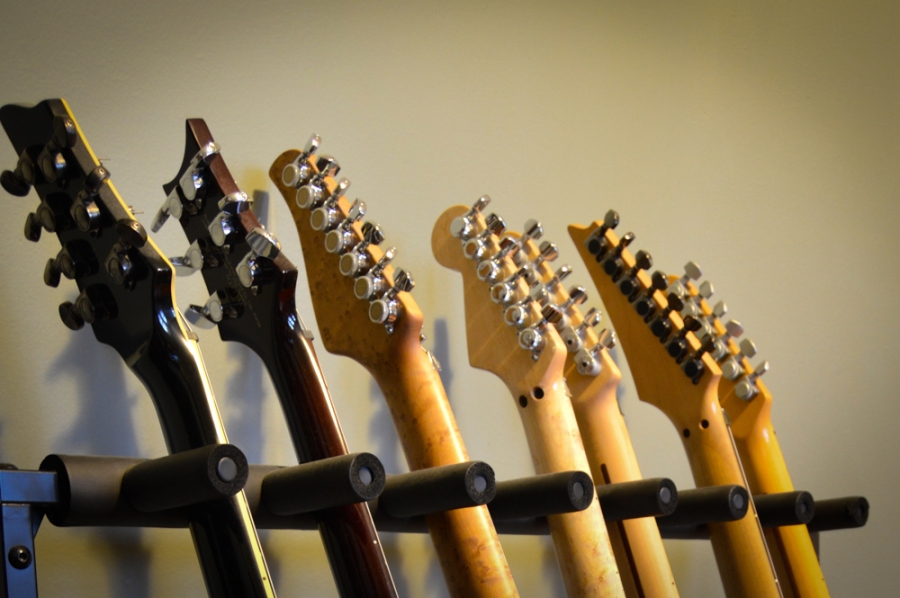 My first love… I’m pretty sure the only things stock about this guitar are the body and neck. Everything else – tuners, nut, bridge, electronics – has been changed out at one time or another. Currently, this has a pair of Suhr ML Standards and a Dimarzio AT1, but this is also my testbed for trying out singlecoils so that could change at any time.

A custom order that came in at the start of 2013, and my main player ever since. Currently this has a calibrated set of Bareknuckle Rebel Yells in it.

My main seven string before the Suhr, and the guitar used on most of the leads for “Zero Mantra.” This is well worn and a bit of a mutt too, with an Original Floyd Rose replacing the LoPro Edge that had fallen to pieces over the years, and a Dimarzio PAF in the neck and Frank Falbo wound singlecoil in the middle. This guitar is a bit rawer sounding than the Suhr,with a bit more growl.

The first Suhr I ever played that really blew me away, and the reason my Strat now has ML Standards. This guitar is way nicer than it has any right to be.

I picked this up after the completion of “Zero Mantra” so it’s not on that album (I had a Sherman 5 string at the time), but this is a huge sounding bass. Finding strings for a 37″ scale low B is a little tricky, however.

Bought as a replacement for my PRS Singlecut SE – I figured it was time to sell a couple cheaper “special purpose” guitars and replace them with one really nice one that would cover the same purposes, and around that same time a friend of mine down in the Virginia decided this guitar didn’t really work for either of his bands. Thing sounds huge – super defined, but also very thick.

I’ve lusted after the original 550RFRs for years – they’re just such ridiculous looking guitars, and everyone needs a RG550, they’re the perfect shred guitar. I imported this one from Ishibashi – in the summer of 2015, the yen/USD exchange rate made this pretty affordable. I bought it mostly for the color, but as it turned out I got lucky – there’s a gorgeous flame to the fretboard, and it’s an awesome sounding guitar, even with the stock pickups.

This one started life as a 2014 American Deluxe neck and a 2014 American standard body, and was set up as more of a blues/cleaned tone Strat, as an alternative to my Inca Silver American Standard. It ended up being a stupidly nice guitar – extremely resonant, very clear, and very comfortable to play. This has a set of Fender Eric Johnson pickups in it, which I’ve been very impressed with.

I have a couple more I need to update as well, when time permits.